The Royal Palace, 402m by 435m, was erected in the reign of King Ponhea Yat (1434), and then it was renovated in the reign of King Norodom (1866). It was formerly called “Preah Barom Reach Veang Chatomuk Mongkul” that meant it was conveniently located at the confluence of four rivers (the Upper Mékong, the Lower Mékong, the Bassac, and the Tonlé Sap). Nowadays, it is literally called in Khmer “Preah Barom Reach Veang”. It is like a small town of royal dynasties, regarded as the symbol of the whole nation. Its complex is surrounded by a high pagoda-style compound decorated with the boundary strings. All the pavilions are adorned and painted with the yellow color representing Buddhism and with the white color representing Brahmanism.

The Royal Palace is a royal residence now where His Majesty, the King of Cambodia, and the royal families live. However, it is open to the public from 7 a.m. to 11 a.m. and from 2 p.m. to 5 p.m. daily except holy days. 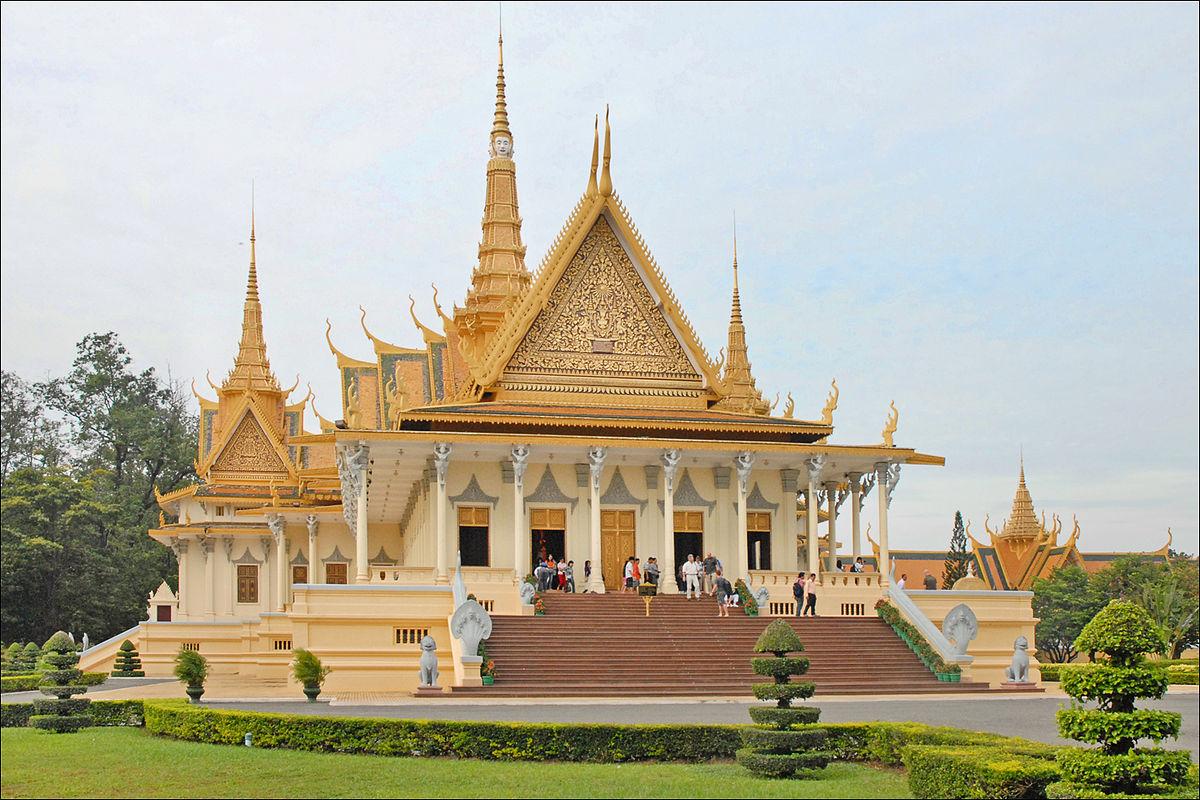 The Silver Pagoda was erected in the reign of King Norodom in 1892 and inaugurated in 1903.

King Norodom’s successor, King Sisowath, who was his younger brother, kept reigning and decorating the inner wall. Then, Prince Norodom Sihanouk restored it in 1962.

Emerald Buddha: Made of emerald, the Buddha sits on a gold throne and wears a gold sash set with diamonds across his both shoulders.

The Standing Buddha: The statue including the pedestal and parasol were made of 90kg of gold, which is encrusted with 2,086 diamonds, rubies and emeralds. That Buddha was called “Preah Chin Reangsei Reachika Norodom” in the reign of King Sisowath (1904).

Burmese Marble Buddha: The Buddha stands in a gesture of walking across a river.

Gold Palanquin: With wooden handles covered in carved silver, the palanquin was made of 13kg of gold.

One Buddha Statue: Set with diamonds, the statue was made of 103 Damloeng of gold.

One Buddha Statue: Set with diamonds, the statue was made of 1.5kg of gold.

One Buddha Statue: The statue was made of 80kg of bronze.

There are many priceless artistic treasures on exhibition made of gold, silver, copper, copper alloy, marble, glass, and ivory.